This article explains different location referencing methods in regard to suitability for systems dealing with traffic information and consisting of multiple subsystems, being developed and run by different parties.

Location is a point, linear section along a road or an area on Earth, which we want to address.

Location Reference is a message (depicted as a postcard in images below) by which provider describes a location to a consumer.

Location Referencing Method is set of data and rules, which the provider uses to write the location reference and the consumer to read it.

Provider is an entity publishing location references. In this article is provider depicted as my grandmother.

Consumer is an entity, receiving the location reference and trying to understand what location it describes. It is depicted as myself in teenage with a guitar.

My grandmother lived in Radslavice, a village close to town Přerov. In 1985, she asked me to buy some screws. Her description (location reference) of the hardware shop was: Go to Přerov, find Baťa shop and 50 m from there is a hardware shop, where I shall get the screws.

When I went back to my Radslavice, I explained to my grandma, that she is using very outdated location set and should update it. 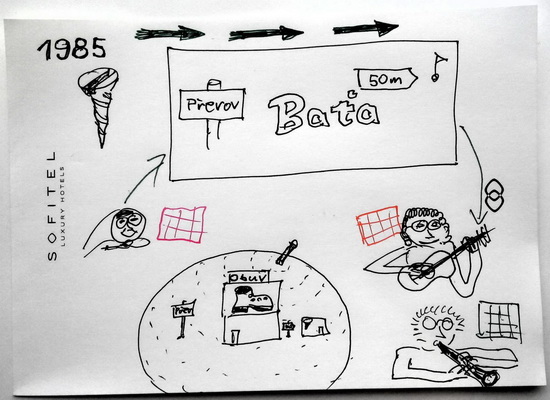 Two weeks later I visited my grandma with my younger brother (playing the clarinet). This time it was his turn to go to hardware shop - any my grandma did use exactly the same location reference as before - referring to non-existent Baťa shop.

From this I have learned, that it is not easy to update even very outdated location set.

Jaroslav Zvára was a professional dreamer dreaming about drivers, reporting traffic events to a call centre, roadworks and closures being registered in one central system. His strange habit to turn the dreams into reality meant in 2005 that there was ongoing project called JSDI (United system of traffic information) including all relevant state organizations and that there was built NDIC (National Traffic Information Centre), where was all the systems gathered and stored in central data stored.

When he called me, that all the systems in JSDI will be using one common map data set called Global Network, I got scared. Reminding the large block schema of NTIC exchanging data with many different organizations using systems developed by various companies I told him: “You are heading into big trouble.” and explained to him, that at the moment the Global Network map will be about to be updated, it will be very difficult task, as it requires too many different organizations and developers to update the maps at the very same hour. Jaroslav did not care and the system was built assuming all participants would share exactly the same version of Global Network. 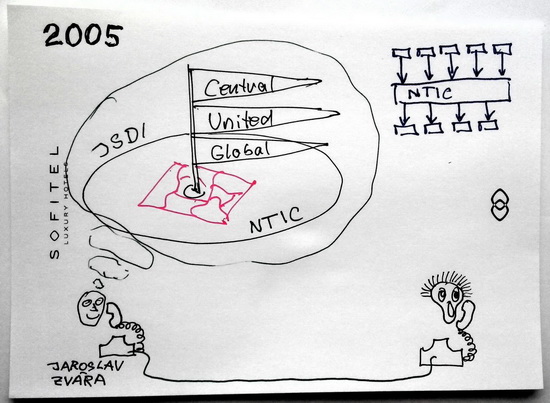 Few years later the problem appeared exactly as I predicted and update of Global Network map in all participating subsystems was delayed about one and half a year.

From this I have learned, that complexity of map updates with shared map location referencing grows with number of participants.

The reality (depicted as a globe) is described by means of a map. Road segments are represented by so called “features”, each feature having in the same version of the map unique ID. Long road consisting of multiple road segments is represented as list of feature IDs, e.g. [1235, 1236, 1238].

Provider and consumer must have exact copy of such a map. As the IDs are changing between versions of a map, it means it must be exactly the same version.

If my grandma wants to describe a location, she would write following location reference:

I, as a consumer, would get the location reference, check, that the map provider and version used is what I have in my own system currently implemented, and then would use the list of IDs to find the location my grandma wanted to describe. 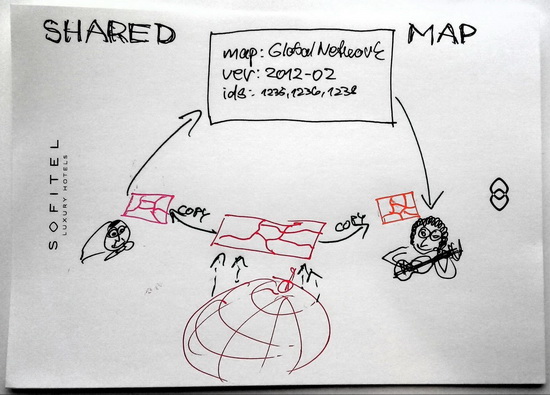 pros (assuming, both parties have exactly the same version of the map)

Coordinate map update is difficult, because there are different subjects, each having independent budgets and management and each have to agree with system provider on the update. If we take into account private companies consuming the data, they often struggle with the costs related to purchasing new map licence. This often result in using different map and degraded location referencing decoding success rate and precision. 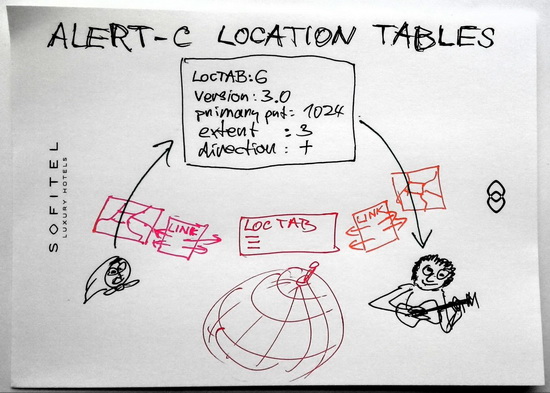 Predefined location set location referencing is not suitable for internal description of all locations in the system, as it often fails to describe some locations or describes them inexactly.

On the other hand ALERT-C location table location referencing is most popular at commercial consumers, who do not have to purchase map of the provider. The costs of this is that some (mostly less important) locations and events cannot be decoded.

Taking into account, that map vendors release maps at different pace and that LINK data are provided with some delay, fully coordinated map updates at all parties is always delayed few month.

Dynamic location referencing (sometime referred to as “on-the-fly”) breaks the requirement to share any map data between provider and consumer (the only requirement is that both maps are describing the same area).

What can be read as

The correct result is either features in consumer map, representing referred location, or finding, that described location cannot be found in consumer map (it is better to tell “I do not know” than finding and old road following described highway). 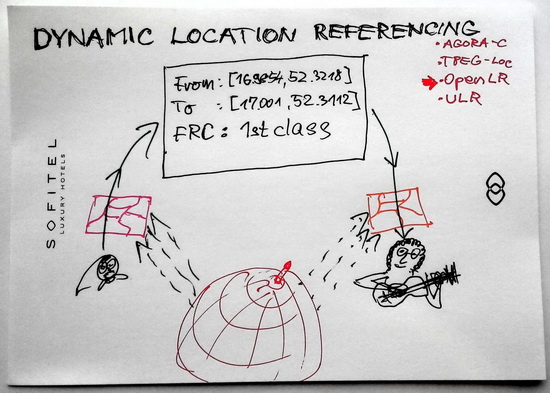 Regarding quality values TomTom states (and values seem to be proven by independent tests):

The TomTom implementation was tested with encoding and decoding in a TomTom environment with different maps from different versions and different vendors. The tests used line locations being covered by TMC and also on non-TMC roads. The test results cover the accuracy of the OpenLR™ method and the code size: success rates with maps from same vendor are above 98% with more than 50% error detection rates and above 93% for cross map vendor with error detection rates also above 50%. TMC road stretches show a higher success rate. The average size is 16-20 Bytes per location.

Do not bother your grandma with OpenLR

Each task and solution shall be done by proper person, technology and at proper time.

My grandma was real master at technology of baking cakes - pizza sized poppy seed pie was her masterpiece. I was always able to locate it very quickly and made related location reference obsolete within half an hour.

If you are a person influencing development of traffic information systems, I propose you to